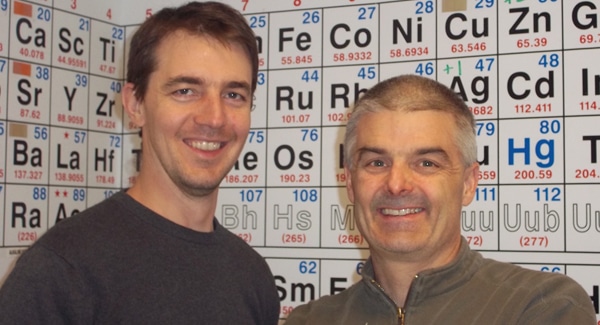 GO: Could you tell us about the flipped classroom and how it works?

Aaron: Jon and I have not lectured to our students in four years. We’ve created instructional videos that deliver the content that we used to lecture to our students for the students to view at home. When they get to class, they are there to do work. They pick up labs. They do interactive activities. They can complete problem sets. Under a traditional lecture model, kids would write down everything that you wrote on the board, and they would go home and try to interpret that and translate that into the assignment that you gave them to do at home, and there’s a disconnect there. They were having trouble connecting what they had been taught in class with what they were supposed to apply at home. What we realized is that’s when students need us present, when they’re trying to bridge that gap. They need us there to help them out to understand content, not to deliver content.

GO: What happened when you first started to do the flip?

Jon: All the kids would watch the same content on the same night. They’d all watch unit one, podcast three on Tuesday night. On Wednesday in class, we would all talk about that video and then we would all do whatever the activity associated with it was: lab work, some directed problem sets, whatever it might be. We really didn’t change anything about what we did, except we moved the lecture to home, the homework to class, and we saw amazing results with kids.

GO: How did you change things after the first year?

Aaron: We realized that we have a library of videos. Why does every kid have to do the same thing on the same day? Why don’t we give them weekly goals, and the students can essentially work at their own pace through that week? Now students are all working on different things at different times. By the end of the year, we have students in three different units of study. Some are done a month early, and they start on a project. We have kids doing different things at different times on different days. We call it our three-ring circus of learning. It’s more like an eight-ring circus of learning. We’re calling it the flipped mastery model.

GO: Did you say it’s like an eight-ring circus?

Aaron: Yes. Of all places to do this, we’re chemistry teachers. We’ve got fire. We’ve got dangerous chemicals. We’ve got all sorts of stuff going on. We have kids doing a myriad of different things in class at once, and we run around and manage it all.

Jon: Have you ever been in an elementary classroom with centers? We’ve basically stolen that and put it into a high school science classroom. But the difference is that we’re not telling them what center to join. Whatever’s the next thing that they need to be doing, they do. The kids are taking responsibility for their own learning.

GO: Does the opportunity to set their own pace make them more interested in the classwork?

Jon: Yes, they’ve bought in. If you could come into this classroom and just hear the rich interactions that these kids are having, it’s amazing. There are still some kids that don’t buy in. The kids who don’t buy in are the kids who want to be spoon-fed, and we’re not letting them do that.

GO: What do students think about the flipped classroom?

Aaron: A student this year fractured her pelvis in three places in a skiing accident. She was out of school for a month, but she came back and was caught up where she needed to be. She hadn’t done any of my labs, but she had watched all of the videos. She had done all of the problem sets that I had for her to do. I even gave her access to take the test at home, although normally we don’t let the students take the test at home. She came back and all she had to do was catch up on a couple of labs. Our students really like the flexibility that this gives them, especially the students that are busy, heavily involved either with a job or school activities.

GO: What about parents? What has their reaction been?

Jon: Because we’re expecting the kids to actually learn it, when we get to the end of the unit, the kids take a summative assessment. We expect them to get 75% on it or better. This is the way the conversation with parents usually goes. They say, “So, Mr. Bergmann, you’re going to make sure my student learns it.” “That’s right.” “And if they don’t learn it, you’re going to provide help for them to learn it.” “Yes.” “And if they still don’t learn, you’re going to continue to provide help for them to learn it. You’re not going to accept that they don’t.” “Yes, that’s right.” And then they say, “Thank you.” Because they’ve all been in that class where the class keeps on moving and they get lost, and they are thankful that our students are actually being expected to learn it, and learn it at a level that is acceptable. We have a very supportive parent community, and there was very little pushback from them at all.

Aaron: Yes, I think their homework has value now. If a kid doesn’t do the homework, which is to watch a video, that’s just like cutting class. They’re going to be behind. In addition, the kids who are struggling to connect their learning with their assignments appreciate being able to just have access to an expert in the room when they’re supposed be doing their work instead of going home and getting frustrated. And the parents like it, too, because a lot of parents can’t help their kids with high school chemistry because they haven’t taken it since high school.

GO: How has this transformed learning for your students?

Jon: Our kids like that we’ll say, “Instead of just doing busy work, if you can prove to me that you’ve learned it, you can move on.” It’s really changed the classroom from “finish these assignments” to “learn these things.”

Aaron: Learning for students is no longer jumping through a bunch of hoops for the teacher. It’s utilizing the tools that the teacher gives them to learn the objectives that are part of the course in a way that’s meaningful for them.

GO: It sounds like you’ve also seen an improvement in students’ learning and retention. Do you have any examples that you can share?

Jon: Last year I had four sections of freshman science. I had a teacher from another school come and visit me. He was using the same textbook that I did. He said, “You got through how much of this book? That’s a whole year’s worth of my curriculum, and you did that in two-thirds of the year.” And I had only three kids out of 100 fail. I’ve never had that low of a percentage of kids fail. And most of the kids passed every single one of these summative assessments with a 75% or better. The expectation is that they actually learn the material before they move on.

GO: What advice would you give to someone who wanted to try the flip?

Aaron: What we recommend is to pick one unit in your curriculum that you already have developed and try flipping that. Make instructional videos for direct instruction, have the students watch them at home, and then have them do the work in class. There are also videos and online courses all over the Internet that you could use.

See Bergmann and Sams in action!

Watch the videos on their web page.

Explore the social network for vodcasting and the flipped classroom.

Watch some sample lessons to see how it works.