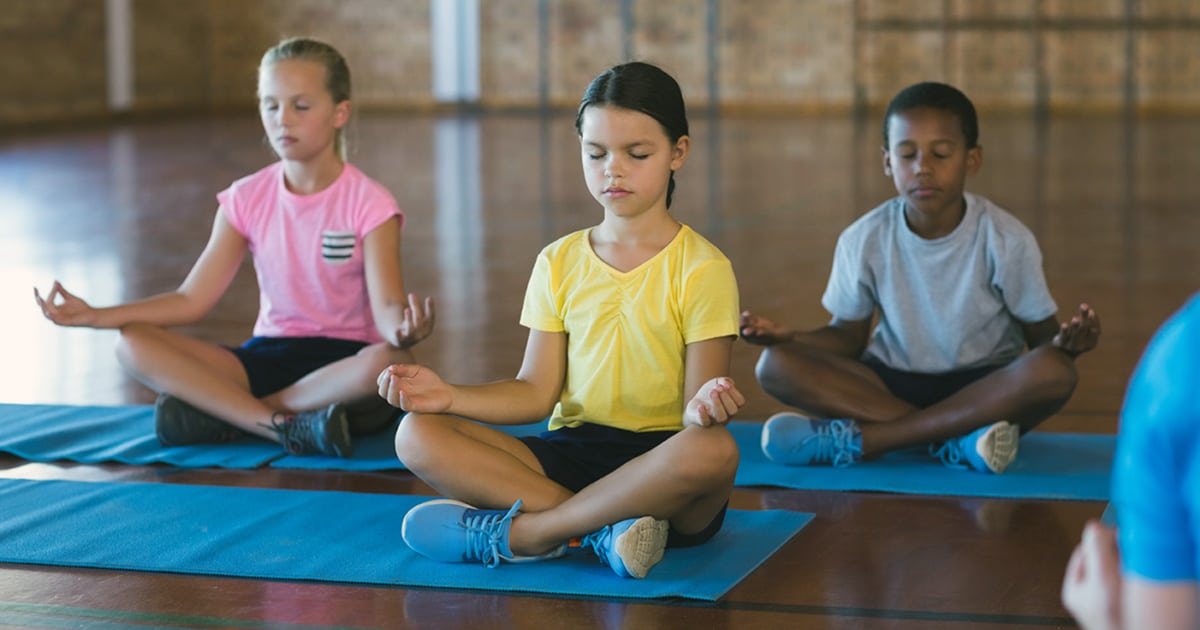 How a kindergarten teacher is effectively using mindfulness in the classroom to calm an anxious daughter. Here are the mother’s observations.

As someone who has suffered from anxiety, I have found that, along with clinical treatment, basic meditation and practicing mindfulness can help me relax.

When I meditate, which is admittedly not often because I have a five-year-old, the clutter of my life and surroundings (parents, you know what I mean) do not distract me. I am able to compartmentalize my thoughts and stay calm in the face of chaos, including times of stress such as divorce or changing jobs.

When I can, I use a mindfulness-based stress reduction technique to help with my anxiety. Mindfulness is the ability to focus on thoughts, feelings, or perceptions that arise moment to moment in a nonjudgmental way. When it comes to managing anxiety, this isn’t everybody’s cup of tea, but it helps me.

Mindfulness in a Kindergarten Classroom

I am 35 years old and these basic activities work well for me to help manage my emotions. So I was pretty shocked when I found out my daughter’s kindergarten teacher was using similar techniques in the classroom.

For my daughter, who is energetic, spirited and emotional, it can be hard to settle down. That’s why I was so pleased, but surprised, when I learned her junior kindergarten teacher Vickie Taylor, was teaching the students mindfulness activities like yoga, quiet reflection and breathing techniques.

Getting Young Children to be Mindful

They break down in tears when they can’t communicate exactly what they want or are told things aren’t going to be exactly how they thought they were? What do you mean I can’t wear my sleeveless dress when it’s cold and rainy outside?! This is an injustice!

It is tough for my daughter to define what she is feeling, let alone try to manage her emotions. Like most kindergarten-aged children, if something upsets her, she starts to cry, yell or is just plain old obnoxious and at that point it is impossible to try to reason with her.

There’s no in-between, no moment where she pauses to consider how to react next. The event happens and the wheels fall off the train.

Then there are the times where we’ve just come home from an evening trip to the park, and she’s tired but still excited – she has to settle down and get ready to go to bed and again, the wheels fall off.

Last year, my daughter’s teacher explained to the parents that they would be doing daily Mindful Monkeys sessions. The sessions included some brief yoga poses after recess to settle down; they would have “sit spots” and quiet reflection in the nearby forest during their nature walks; and when the students were facing a change in routine, she had them do extra sessions of deep breathing.

I was curious about how this was going to work with a bunch of five-year-olds. I had tried to do yoga with my daughter before but it always ended up involving me doing yoga and her rolling around me. That’s not relaxing for anybody!

Effectiveness of Yoga for Young Ones

To my shock, I started to notice my daughter using the techniques at home and they actually seemed to help. So much so in fact, that at home my daughter would ask to watch a kids’ yoga video on YouTube. I’d like to think this is active viewing, not the unwanted, passive kind of screen time.

I’d put on a video for her and start on making dinner. After a while of hearing nothing, I’d sneak into the living room to find my daughter on the floor, calmly watching the video and trying to copy some of the moves. Her meltdowns still happened, but she would sometimes stop herself and start to practice Mindful Monkeys.

There she was, on a random Saturday, after a meltdown about some disaster, she headed to her room on her own “to be alone”. Yes, the trek to her room included yelling, stomping feet and a slamming door, but then – silence. A few minutes later, I went downstairs to check on her and she was lying in bed with her hand on her little belly, breathing quietly and counting.

I was shocked by how the techniques seemed to help my daughter, so I asked Ms. Taylor about using them at home. According to Taylor, “for many students there was definitely an improvement in their self-regulation skills. They began to develop an awareness of what being calm felt like and were gaining a tool box of skills to return to that feeling when they needed [or] wanted to do so.”

Taylor was introduced to mindfulness activities when she was a special education teacher, as a way to help students develop self-regulation skills. She had practiced it with small groups of young children and was eager to apply it to a whole class.

With children, especially kindergarten students, it is easy to spark interest and curiosity through your own passion! We did have some students who struggled at the beginning, but I think many of them were just not used to slowing down during the day and needed time to experience the benefits!

We implemented the techniques at home but, after a few months, life got in the way. I got a new job and we decided to move homes. We forgot about the deep breathing techniques even though they were still doing them at school on a daily basis.

I emailed Ms. Taylor after several intense temper tantrums and she encouraged me to ask my daughter to show me how to do Jelly Belly, Five Fingers and Figure Eights (all techniques taught in Mindful Monkeys). And it helped.

At bedtime, my daughter can be wound up and can find it difficult to settle down enough to go to sleep. So, after her bedtime story, I sometimes suggest we do “Mindful Monkeys” and she kicks right into gear – her little hand goes on her belly and she counts slowly to 10 while breathing in and out.

Research on Mindfulness Classes for Children

Ok, so it worked for my daughter and seemingly this one class. But I know that a sample group of one or 24 isn’t enough to say that these techniques work across the board. So I dug into the research a little and there is some (but not a lot) of research to support the techniques.

According to research compiled by the University of Exeter’s Mood Disorders Centre, when students were exposed to mindfulness-based stress reduction activities, their anxiety was reduced, they were able to concentrate better, they were calmer and had improved sleep.

Another study was conducted by the Department of Educational and Counselling Psychology, and Special Education and Human Early Learning Partnership, at the University of British Columbia. They discovered that, when mindfulness training in elementary school-aged children was combined with opportunities to practice gratitude, kindness and optimism, it can improve cognitive skills and lead to an increase in social and emotional competence. Overall, this practice improves the wellbeing of the children at home and at school.

Mindfulness Could be Encouraged More

Mindfulness is not yet a common in the practice in the classroom according to Ms. Taylor. But with a new focus in schools on promoting student self-regulation and wellbeing, she imagines it will be better known in the near future.

My daughter is lucky enough to have the same teacher again this year. But we also learned enough about the principles of mindfulness for kids that we tried to practice it during the summer.

Watching my daughter do her Jelly Belly breathing technique is truly remarkable. An extraordinary transformation takes place, from the energetic monkey she is, to a peaceful and meditative little person. This intentional practice of mindfulness has benefited her. And, when it has been done on a regular basis, it has helped her slow down and find some calm within her, and me.